You can follow a path.
Or you can blaze a trail.

IN 2001, recruitment advertising was all the same.

Deadly dull print ads stuck together in serried ranks at the back of a newspaper, neat as pins and even less interesting.

The only thing they had going for them was that you had to read them if you were looking for work as online job boards hadn’t been invented.

As a result, employers were held to ransom by newspapers charging up to 7 times normal run of paper rates for recruitment space.

And agencies were happy to churn out insipid copy week in, week out, in exchange for fat commission payments.

Against this background, the 60 Watters were delighted to receive a phone call and an invite to dinner from our client, Iain Graham of Graham Technology.

Over copious quantities of Chateaubriand and Chateauneuf du Pape, he outlined his plan.

“I want a recruitment campaign like no other. I want ads that shock, offend and entertain. I want to generate acres of PR. And to cap it all, I want to hire the best people out there.”

It was like showing a vermillion cloth to an uptight male cow. Egged on by the maverick, energetic perfectionist that was Iain Graham, we set to work creating our best recruitment campaign ever. It also happened to be the first such work.

The first ad questioned the sanity of an entire generation of soft-ware engineers. The second openly insulted the CEO himself.The third risked offending potential employees by calling them geeks and nerds. The fourth called for business development personnel from outer space.

And so it went on.

First I would like to compliment whoever wrote the advert in the Herald, it is the most unusual, witty and accurate job description I have ever seen. Secondly, I would like to apply for the job. I attach my C.V. for your perusal.

Then people who weren’t even interested in the job advertised began to email:

I’m not actually applying for the position you have advertised in last week’s Herald. However, I just had to write you a wee message to say that reading your job advert is the first time I’ve ever laughed while reading a job advert in my life! It was so straight-forward and amusing that I actually wished I WAS a technical writer!

It wasn’t long before journalist’s started to get in on the act, too, writing articles galore about the campaign. A full page article in the Mail on Sunday. Another one in the Sun. Endless free coverage in the Glasgow Herald. Even a segment on the West Sound radio news.

Not only that, but the ads proved so popular with the software community that they went viral, with scans of the campaign being emailed all over the world, posted in blogs and talked about on chat rooms.

And what of the jobs themselves? Did we fill them? Oh, yes. A sample of 4 ads across 10 insertions in the Glasgow Herald, generated 785 directly attributed applications for a total of 33 posts. You can see the campaign here.

Thanks to copy that carefully discouraged unsuitable and unqualified candidates, the quality of candidate was also very high. As was client satisfaction. We’ll leave the last words with the man who refused to follow a path, but chose instead to blaze a trail.

“As a result of this campaign, Graham Technology recruited 33 people but more significantly we have recruited 13 graduates, 8 of whom have a first class honours degree and 4 of whom have a 2:1 honours degree. The campaign has not only allowed Graham Technology as an organization to cherry pick the cream of Scotland’s best talent but also generate PR on a local and internationalbasis with the advertisements being featured in national newspaper articles companies around the globe.” 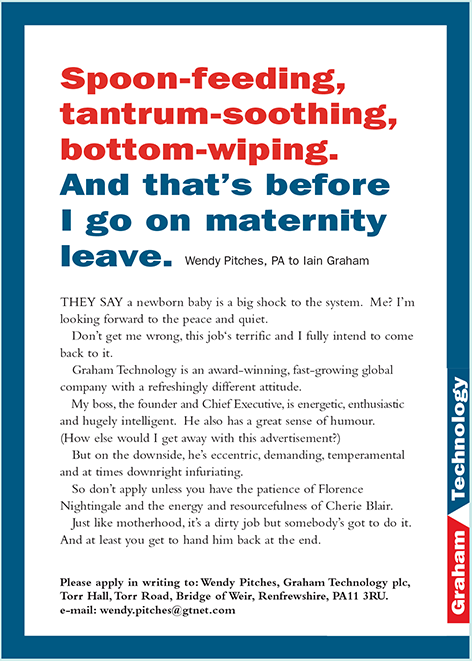 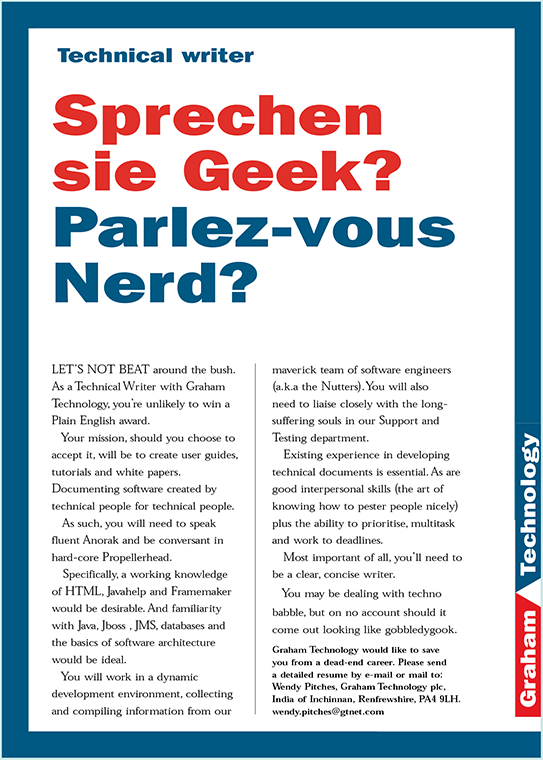 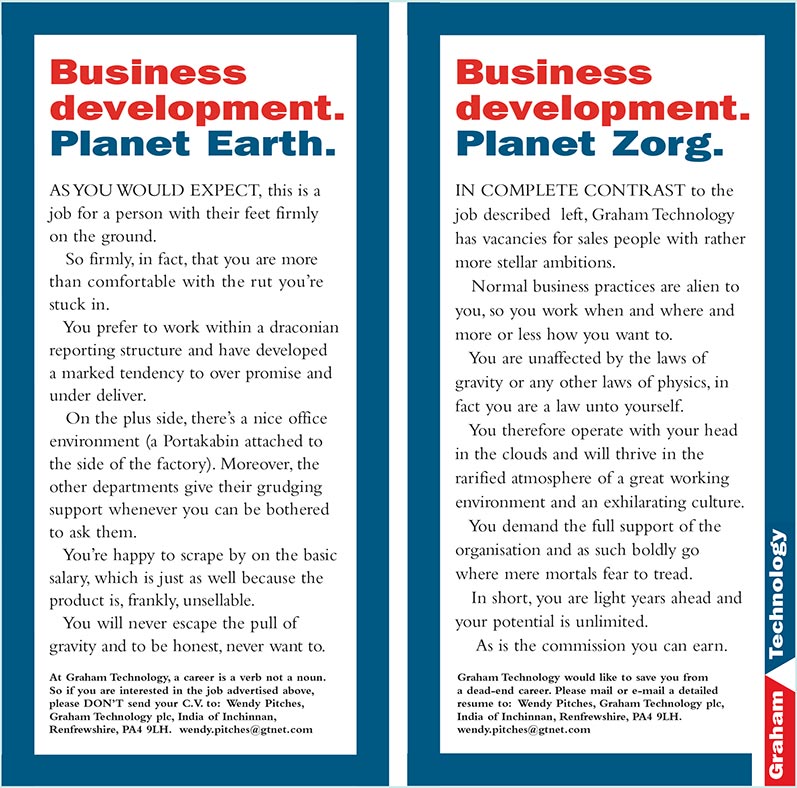